This word has been a major part of my life- growing up catholic, I said it multiple times  to my family and friends at mass every week. From my earliest memories the exchange of the symbols of peace and the speaking of the word take me back to simpler time of my life. A time when the word Peace was said gently and pleasantly in the church- the echoes of the humble exchanges drifting through the pews and then the entire building filling up with soft, light and earnest exchanges of peace- as if we were somehow collectively manifesting it into existence. It was my favorite part of the service- maybe it was because it was the only interaction that we actively had with each other during service- or it was the gentle smiles and warm handshakes- maybe it was just because I really loved looking at another person, making eye contact, then physical contact and then wishing them… “Peace”. 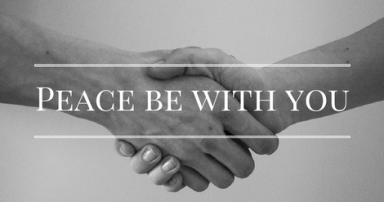 It was a very fulfilling word- even at that young of an age. Even now, when I attend service the ritual of offering each other the signs of peace is what I look forward to the most. Maybe because I grew up with the word as a major part of my life- it always felt like I knew what it meant- without even being told. For me, it was a concrete principle within my small universe while I was trying to figure out my place in the larger chaotic unknown that is this life. It meant something familiar and affable. Peace for me was a place where I could speak to anyone and be greeted openly and with a smile. Peace was a sense of community, of exchange- it was a place of unity and the beauty of a group of people following a ritual and being in total agreeance with each other. These were my emotions around it. I guess if someone was to ask me at that time what Peace was- I would have defined it vaguely as the opposite of war or some sort of harmony. It wasn’t until much later that I realized that I really had no idea what Peace was.

I lived most of my life with a vague concept of what Peace meant- some notion that it was good, that it was something to strive towards (but not particularly attainable) and an idea that it could bring me joy? humbleness? serenity?… well I guess it was just an idea that peace would bring me peace. But each time life twisted it’s unpredictable and tragic turn- Peace became further and further away, less attainable until it seemed less and less likely that something resembling my vague notion of peace could actually be manifested at all.

Then I started to work for the Peace Corps, and I set myself on a long path of discovery about that word. Specifically, what peace means to my American culture and how that differs in different cultures around the world. I think that for a majority of the 3 years of my first Peace Corps service- I was really just performing a very long meditation on what Peace is, and when I completed my service- I still had no idea. I had tried to exolore it, understand it and even meditate upon it (in a very peaceful setting nonetheless) but I was no closer to gaining any more insight into this word or what it actually means.

However, having spent over a decade now working for an organization whose first name is Peace- I thought that it warranted a revisit to that mediation and some deeper digging. As an avid spelunker- I went as deep as I could and dug up as much as I could. The next 13 blog posts or so that I make will focus on Peace. We will follow the concept and idea of Peace from it’s “creation” to the present. We will explore the symbols that dominate the idea of peace and see where the come from, we will go searching for Peace to see if we can understand or even begin to wrap our heads around the idea of it’s existence. We will then head into the origins of the Peace Corps itself and follow up with challenges and the growth and evolution of this agency that I love. I will define Peace in many diffrent ways- and I will talk about what it has come to mean for me- because I’ve realized that this is a story that needed to be told. I think because not many people know it that well- in fact most people involved in peace work as well as PCV’s/RPCV’s and PC staff can’t even tell you what peace is any more than I could describe it above. But we will dive into all of that in the coming weeks. SO, if you are  interested in peace work, the nature of peace or a person in service, working for peace or considering a job in the near future revolving around peace- buckle up. This is everything I know about Peace….may it also be with you.

This post is dedicated to my Mom, who made Peace and service a major part of my life- starting every Sunday morning at 8am. Thank you for this gift- my life decisions and ethics are based on this ritual and many of our discussions so thank you for the gift of Peace.

In the beginning I had many different conversations that sparked this multi-chapter blog post.  When I asked people what Peace was- the most general concept that came up was always something related to war. It was almost as if Peace could not be defined without the concept of war or violence. I don;t know that I will do much better, but I will try. I encourage you to take a moment  (on your own, in your head, or most ideally- in the comments below) and to define what Peace is. Or perhaps more accurately- what Peace means to you.

(Spoiler: This is not the kind of Peace I am referring to…_)